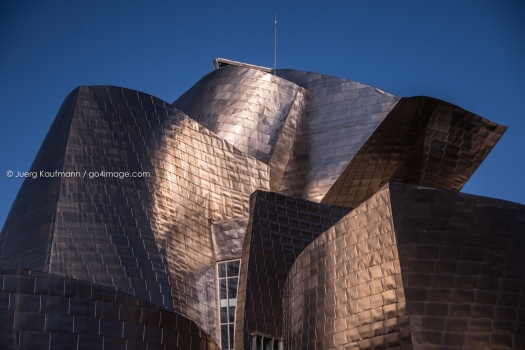 Spain Bilbao March 2018 Guggenheim Museum Bilbao in the morning light
Designed by American architect Frank Gehry, the Guggenheim Museum Bilbao building represents a magnificent example of the most groundbreaking 20th-century architecture. With 24,000 m2, of which 11,000 are dedicated to exhibition space, the Museum represents an architectural landmark of audacious configuration and innovating design, providing a seductive backdrop for the art exhibited in it.

One of the most admired works of contemporary architecture, the building has been hailed as a “signal moment in the architectural culture”, because it represents “one of those rare moments when critics, academics, and the general public were all completely united about something. The museum was the building most frequently named as one of the most important works completed since 1980 in the 2010 World Architecture Survey among architecture experts.